How much is your property worth?

Discover it now with our FREE online estimate tool.

Get a free consultation with our property advisors

After a strategic decision, Jin was looking for a replacing tenant in order to terminate his company’s lease for a 10,000+ sqft commercial located in central Singapore. After meeting a number of agents who could not make it, he closed a deal within six weeks with the real estate agent recommended by Propseller. Read his story.

Two years after we moved into this very nice 10,000 sqft office in central Singapore, we decided to move out of it. But since we signed a 3-years lease, we still had a one-year commitment to go. In other words, we were committed to a seven digits amount of expenses for the rental of a unit we no longer needed. For this reason, I was looking for a replacing tenant that could take over as soon as possible and the real estate agent to find this tenant. Fast. From the beginning, I knew it was going to be a complex case, involving not only a landlord but also a current and a replacing tenant. 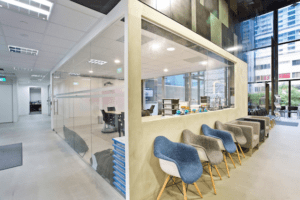 One active Real Estate Agent out of six met

Initially, I had two real estate agents, both were friends of mine. While one was pushing hard, the other one was not.

As I had a deadline, I decided to meet four other ones. Two of them dropped out by themselves after some time and wasted my time. The two other ones kept asking irrelevant questions, had doubts, did not even show up on time at the meetings. I quickly realized we would not achieve any result with those people and I asked them to stop representing my company. In the end, out of six real estate agents I met, I was left with only one actively working on my case.

Out of six real-estate agents I met, I was left with only one actively working on my case.

That’s when I went on Google and found Propseller. I was looking for one of Singapore best real estate agent. Equally important, one that would specialize in my property type and area: Commercial units in the central area. I found the concept of Propseller very promising and decided to give it a try. After calling me back, Propseller recommended me two of Singapore best real estate agents for commercial units. They explained with a lot of details why they were recommending those agents. I’ve been very positively surprised when I saw such level of understanding, I really felt they were on my side and able to add value.

A few days later I met one of the two agents: Andre. The minute he entered my office, I knew instantly he was the commercial real estate agent we needed. In fact, when I saw this level of hungriness and expertise, I knew 50% of the job was already done.

The minute he entered my office, I knew intstantly he was the commercial real estate agent we needed. The Rest is History

My two agents worked hard to find a tenant, each one leveraging his own network. Andre, the real estate agent recommended by Propseller went with a pretty direct approach. After visiting our unit, he decided it would suit perfectly a very specific type of business: co-working. He decided to spend all his effort on identifying and contacting 100+ companies operating the business he saw a fit with. He approached companies all over Asia, from Japan to Indonesia. And six weeks after we started working together, we closed the deal. Andre found the perfect replacing tenant I was looking for.

And six weeks after we started working together, we closed the deal.

Starting with a top agent saves time and money.

My experience with Propseller and Andre was perfect. I wasted my time before finding Propseller and saved both my time and money after finding it. I really like the concept of Propseller. It should have always work like this. Thank you Propseller!

The next success story can be yours.

Our friendly, Singapore based team, will get in touch soon.